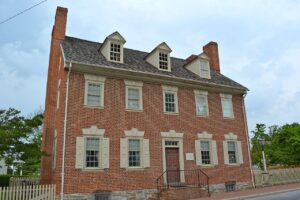 The Neas House will be closed for tours until further notice, due to concers about the coronavirus. We’ll post information when it reopens.

The historic Neas House at Chestnut and High Streets in Hanover is a Georgian residence built around 1783 by Mathias Neas, a tanner who acquired six lots from his brother, George Neas, in November 1782. The property eventually was acquired by their eldest son also named George.

It was George Neas Jr. who expanded the family interest into politics and other activities. He served as Hanover’s third postmaster from 1790 to 1813, and he was the first representative of the borough of Hanover (known as a burgess) in 1815. He also served several terms in the state legislature. George married Catharine Slagle.

George and Catherine’s daughter, Amanda Neas, was the last Neas to live in the Neas House. Amanda has left us quantities of objects from the old house through her present day descendants. These objects include a priceless cookbook with 18th-19th century recipes. Amanda married her Baltimore cousin, Mathias Nace Forney, who helped found the Hanover Savings Fund Society which has become the Bank of Hanover, now PNC. Mathias became a leader of political and cultural life in Hanover. Her father died in 1829, but his widow, Catharine, lived on until 1853. It was George and Catherine’s daughter-in law, who first made an inventory of the house which discloses the contents of the home and property, much as it was when Mathias and George were running their thriving businesses and living quite comfortably.

Many outstanding citizens were born or lived in the house over the years. One was Mathias N. Forney (1853-1908), an inventor and editor who made invaluable contributions to the efficiency and development of rail transportation. His reversible seats made passenger traffic more practical and his steam locomotive was the marvel of its day.

The Neas House has since been restored by the Hanover Area Historical Society and now serves as a historical site.

The Neas House is closed during the Winter months. Tours are available from April til October by appointment only.

Your paid admission to the Warehime-Myers Mansion also includes admission to the Neas House, though you do not have to visit the Neas House the same day you tour the Mansion. You just need to call ahead to arrange for a time to tour the House. For more information, please call our office at (717)632-3207 between 9:00-2:00 M/W/F.